DURHAM, NC — FHI 360 announced today that Ricardo Michel, a leader in international development and finance, will oversee the organization’s newest subsidiary, FHI Partners. FHI Partners seeks to add to FHI 360’s ability to scale social impact by providing client-focused services that are customized to meet the specific needs of corporations and foundations. 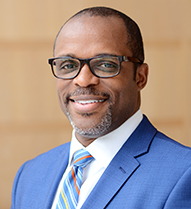 Michel brings more than 25 years of leadership in both the private and public sectors. Prior to joining FHI 360, Michel served as the Executive Vice President of AMEX International, Inc., an international development consulting firm, where he managed strategic business development and operations. Michel previously served as a presidential appointee to the U.S. Agency for International Development (USAID), where he was responsible for public-private partnerships. In addition to driving the agency’s private-sector engagement efforts, he played an integral role in conceptualizing and launching the U.S. Global Development Lab.

“FHI Partners is an example of how we continue to innovate as an organization by developing new business models that are fit-for-purpose,” said Patrick Fine, Chief Executive Officer of FHI 360. “We are extremely fortunate to have a distinguished and versatile leader like Ricardo join our ranks to oversee FHI Partners and increase our ability to deliver social impact.”

Before USAID, Michel spent several years structuring project finance transactions at the Export-Import Bank of the United States. He also served as a Senior Trade and Investment Advisor for the U.S. African Development Foundation and was instrumental in establishing the foundation’s trade and investment initiative for small and medium enterprises. Michel worked for several years as an investment banker and began his career as a certified public accountant.

“FHI Partners provides an exciting opportunity to create innovative strategic partnerships that focus on shared value – impact that benefits both business and society,” said Michel. “I am eager to build on FHI 360’s prolific work by partnering with new and existing clients to generate even greater social impact through our collective action.”

We use cookies and other technologies (“cookies”) to improve our website. We would like to use cookies (1) to learn how our website is used and how it performs, (2) to provide you with additional functionalities to watch videos and (3) to provide you with social media interactions. By clicking “Accept all,” you consent to the use of five cookies and the corresponding functions in the website. FHI 360 does not collect any personally identifying information collected through our cookies, although Google Analytics and YouTube may collect your browser information and IP address. For more information about our cookies and how we use them, please read our Website Cookie Notice. For more information, configuration and to withdraw your consent, please click “Manage consent preferences.”
Manage consent preferencesAccept All
Manage consent

This website uses cookies to improve your experience while you navigate through the website. Out of these, the cookies that are categorized as necessary are stored on your browser as they are essential for the working of basic functionalities of the website. We also use third-party cookies that help us analyze and understand how you use this website. These cookies will be stored in your browser only with your consent. You also have the option to opt-out of these cookies. But opting out of some of these cookies may affect your browsing experience.
Necessary Always Enabled
Necessary cookies are absolutely essential for the website to function properly. These cookies ensure basic functionalities and security features of the website, anonymously.
Functional
Functional cookies help to perform certain functionalities like sharing the content of the website on social media platforms, collect feedbacks, and other third-party features.
Performance
Performance cookies are used to understand and analyze the key performance indexes of the website which helps in delivering a better user experience for the visitors.
Analytics
Analytical cookies are used to understand how visitors interact with the website. These cookies help provide information on metrics the number of visitors, bounce rate, traffic source, etc.
Advertisement
Advertisement cookies are used to provide visitors with relevant ads and marketing campaigns. These cookies track visitors across websites and collect information to provide customized ads.
Others
Other uncategorized cookies are those that are being analyzed and have not been classified into a category as yet.
SAVE & ACCEPT